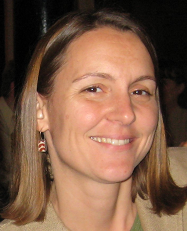 Christy Tremonti is an assistant professor in the Astronomy department at the University of Wisconsin, Madison.  Her research is focused on galaxy evolution, in particular the processes that help regulate star formation. She is an observational astronomer with a strong interest in spectroscopy from UV to IR wavelengths.  She also an avid “data miner” and is a member of the Sloan Digital Sky Survey III (SDSS-III) collaboration.

Christy is currently working with postdoc Yanmei Chen on understanding how and when star formation shuts off in massive galaxies using data from SDSS-III.  With graduate student John Chisholm, she is exploring the absorption line signatures of galactic winds in massive star forming galaxies with and without active black holes.  With undergrad Karissa Metko, she is searching for young, chemically unenriched galaxies in the SDSS III.  Christy is collaborating with graduate students Paul Sell and Anna Williams on analyzing Chandra, Hubble Space Telescope, and EVLA images of a sample of extreme ‘post-starburst’ galaxies in order to understand what caused star formation to halt abruptly.

Before joining the faculty at the UW-Madison, Christy was a Humboldt fellow at the Max Planck Institute for Astronomy in Heidelberg Germany and a Hubble postdoctoral fellow at the University of Arizona.  She was educated at Colgate University (B.A. 1990) and Johns Hopkins University (Ph.D. 2003).