The goal of the UW-Madison Astronomy Graduate Program is to prepare capable and creative astronomers for careers in research and education. The granting of a Ph.D. degree indicates that the recipient has a mastery of the knowledge and techniques of modern astrophysics. In addition, the recipient is expected to be familiar with problems that are at the frontiers of astrophysical research.

More generally, and most importantly, a successful Ph.D. is proof that a person can identify an interesting problem, set about solving it, in the process acquiring the necessary skills and tools, and to make a significant contribution to a field in a largely self-directed and self-motivated way, under the general guidance of a Ph.D. advisor. This is the skill that sets Ph.D. students apart.

If you accept the challenges of a Ph.D., you will find a welcoming and inspiring work environment at the UW-Madison Astronomy Department that will allow you to achieve these goals.

The application deadline for Fall 2023 admission is December 10, 2022. If you have any questions, please do not hesitate to contact our Graduate Program Manager, Heather Sauer, hsauer@wisc.edu.

The University of Wisconsin–Madison awarded the second highest number of Ph.D.s overall and the most life sciences Ph.D.s of any U.S. university in 2016, according to the Survey of Earned Doctorates, a national project that collects annual data on doctoral graduates. The UW–Madison Graduate School conferred 823 doctoral degrees in 2016. The year before, the UW ranked third, with 836 recipients.

“The high number of Ph.D. degrees awarded is a result of multiple factors,” says William Karpus, dean of the Graduate School. “First, UW–Madison has breadth and depth in terms of graduate programs. Second, the outstanding UW–Madison faculty-driven research enterprise is an attraction for top graduate students from across the world. Finally, the combination of graduate student tenacity and faculty mentoring plays a significant role in the creative process necessary to bring research projects to fruition.”

Ph.D. recipients from UW–Madison go on to pursue a variety of career opportunities across education, government, nonprofits and the private sector.

In the Graduate School’s exit survey, over 70 percent of UW–Madison doctoral students report securing employment by the time they complete their degree, surpassing the national average of 62 percent. Nearly 90 percent of students employed at the time of graduation also report gaining a position in the field of their doctoral training.

Of UW–Madison doctoral students who reported post-graduation employment, 23.9 percent said they had a tenure-track faculty position and 15.3 percent reported a faculty non-tenure-track position. In some disciplines, students work as postdoctoral researchers before securing tenure-track appointments. About 40 percent of UW–Madison graduates take postdoc positions after graduation.

The Department of Astronomy offers the Ph.D. in astronomy. Although a master’s degree is offered, students generally are not admitted for a terminal master’s degree. Students typically begin graduate work in the fall semester. Undergraduate preparation typically includes mathematics through differential equations and at least three years of college physics.

As the Astronomy Ph.D. Program comes with a guarantee of financial support, our admissions process is highly competitive. Typically, the Department of Astronomy admits a small number of applicants annually, on average four, with year-to-year fluctuations.

Please Note: Admission to the doctoral program requires admission to both the Department of Astronomy and UW-Madison’s Graduate School.

Pursuing a PhD is a major life decision. Therefore it should be a well-thought-out decision rather than a default choice. The personal statement is an important component of your application. It is your opportunity to highlight your preparation and motivation for graduate school in astronomy and what unique strengths you would bring to our program. Below is some advice for things to address in your personal statement. You are encouraged to find reference letter writers who can speak to these things as well.

Please note, neither general GRE nor physics GRE scores are required and, if submitted, will not be considered in our evaluation of the applicant.

General Process: Apply using the UW-Madison Graduate School Electronic Application. Allow 30 to 60 minutes to complete the application. Prepare all materials to be uploaded beforehand. If an unsubmitted application is not accessed in a 120 day time period, it will be disabled. You may wish to consult the graduate admissions FAQ and application guide.

International Applicants Must Also Submit The Following Materials:
*If your degree granting institution was NOT primarily taught in English*

Please Note: All components of the application are essential for consideration of your application for admission.  If you are unable to submit any of these items electronically, please contact the Graduate Coordinator for assistance. 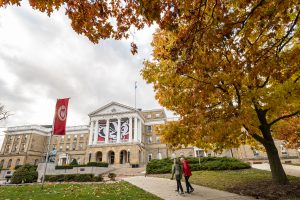 The City of Madison offers all of the conveniences, culture, and diversity that one would desire from a big city while still maintaining the personality and inclusive feel of a small town. Madison has been named the #1 green city in America, # 1 city for young adults, #2 city for recreational activities, a best place to live and work, a best city for college graduates, and one of the five happiest cities in America.

As the state’s capital, with a population of over 200,000 people, Madison is the second largest city in Wisconsin. But if you’re in need of a larger metropolitan area, you can easily travel the roughly 80 miles east to Milwaukee or 150 miles south-east to Chicago. However, as most of us agree, there is plenty to do in and around Madison to fill our free days with entertainment and recreation. 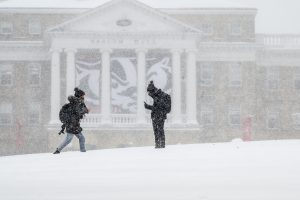 A great aspect of our department is the community that has developed amongst the grad students. One of our favorite spots for music, film, food, beer, and just basically hanging out is the Union Terrace. During the summer, you can sit in one of the many multicolored chairs on the Terrace and look out over the beautiful Lake Mendota while eating a fresh cooked brat and enjoying one of the many locally brewed beers they have on tap.

After work on Friday, we usually head to the Terrace for a beer and then out to dinner afterwards. There is often someone who wants to go see a concert or a show (or is even performing in one) and generally others that want to come with. We are a close-knit group, and that makes living in a city like Madison all the more enjoyable. 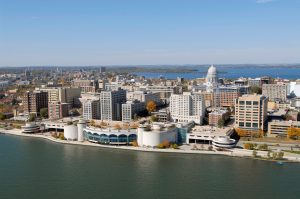 Book lovers will enjoy the annual Book Fest featuring readings, lectures, book discussions, writing workshops, live interviews, children’s events, and more. There are frequent art, music, and food festivals throughout the warmer months, and Winterfest and Children’s Museaum “Adult Swim” nights in the winter. And of course, it wouldn’t be Wisconsin without the annual Brat Fest in which you can enjoy delicious brats while listening to the best local and regional bands. 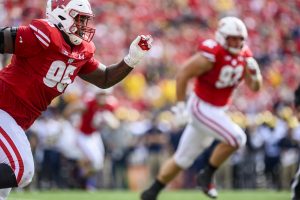 Of course, you can’t have a city without sports. The University of Wisconsin has consistently top ranking football, basketball, and hockey teams. In fact in 2006 both the men’s and women’s hockey teams won the national championship! Although tickets may be somewhat hard to come by for certain games, you are sure to enjoy any of the University sporting events. The Madison Mallards, an independent semi-pro Northwoods League team, is also a great bet for a summer afternoon. For just $24 you can get a ticket to the Duck Blind for unlimited food and drink during the game. Or if you’d like to drive a bit, you can also catch a Brewers game in Milwaukee, or a Cubs, White Sox, or Bears game in Chicago. The Forward FC soccer team (Div. 3 USL) and the Madison Radicals Ultimate Frisbee Team at Breese Stevens are also popular.

Graduate Students also enjoy competing in the Madison Ultimate Frisbee Association Summer League and the Winter Indoor Soccer League. Madison is well known as a bike-firendly town, with many grad students biking for transporation, sport, or just recreation! Additionaly, Madison has a strong fitness culture with plenty of running and biking routes, and even hosts an annual Ironman Triathalon and the annual Crossfit Games. 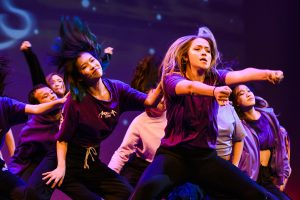 Madison has many great music and film venues along with every type of restaurant and bar that one could want. The Orpheum and the Barrymore Theaters are the best places to catch the big national bands coming through Madison, while smaller venues like the High Noon Saloon offer a more intimate concert environment. You can also find classical music, plays, dance, and opera at the Overture Center and the Union Theater.

And if the band or show that you’re looking for is not coming through Madison, chances are you can find them in Milwaukee or Chicago. If you like to dance, there are groups within our department that enjoy contra, ballroom, and swing dancing. There are also many clubs downtown where you can find your favorite type of dance music.

For those interested in film, the city holds an annual Film Festival showcasing a week of the best new independent films, world cinema, and new media. Also, the University Cinematheque offers foreign and independent films year-round.

Madison offers a very wide variety of restaurants and bars. Whether you want Chinese, Japanese, Thai, Indian, Ethiopian, Gambian/Senegalese, Italian, Russian, Mexican, or American food you can find it, and you’ll surely have someone who wants to come with you. As can be expected from a city and college campus, the bar scene is very vibrant. You can find anything from crowded rowdy undergraduate filled bars to wine bars mainly attended by grad students and the business men and women of the city. Our grad students tend to go for somewhere in the middle; our favorites being Paul’s Club, The City Bar, Genna’s, the Weary Traveler, and The Great Dane.