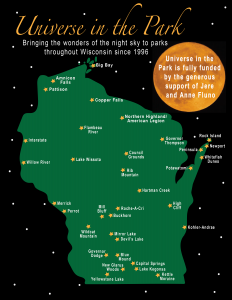 Universe in the Park (UitP) is a popular outreach program of the Department of Astronomy at the University of Wisconsin – Madison. UitP is predicated on a very simple idea: the best environment in which to introduce the general public to astronomy is outside under dark skies.

Since 1996, we have taken UitP to state parks throughout Wisconsin during the summer camping season, giving talks and slide shows, answering questions, and letting the general public view astronomical objects through one of the UitP telescopes.

A typical UitP session begins just after sunset with a 30-40 minute talk and slide show about astronomy. While particular topics are left up to the presenters, they usually give a broad overview of one or two astronomy topics.  Recent astronomical news is frequently discussed, such as the discovery of new solar systems, the demotion of Pluto, and the latest results from the Hubble Space Telescope.  The talks are presented for audiences of all ages.

At the conclusion of the talk, weather permitting, we set up a moderate aperture (8″-10″) telescope and provide park visitors the opportunity to view available astronomical objects. UitP sessions run as long as there are people interested in looking through the telescope, and the parks typically close before the interest has been sated.

The statewide Universe in the Park program of the UW-Madison Astronomy Department is funded, in its entirety, by the generous support of Jere and Anne Fluno.

UitP is naturally suited for those parks that normally host evening programs, but any state park can schedule a UitP visit. Bear in mind that the best viewing is from an open area with clear views of the southern sky. We schedule UitP visits based on requests and the availability of UitP volunteers to lead the sessions.

To schedule a UitP visit, please fill out a Badger Talks Form with “Universe in the Park” as the event name.

The UitP schedule will be updated as events are added.

We do ask that parks in the northern part of the state try to coordinate UitP visits with each other so that we can visit two or more parks in one trip. We are open to scheduling UitP sessions on any day of the week, though we prefer weekends for visiting the more distant parks. As always, we will schedule as many UitP sessions as possible. We are also interested in extending the UitP season into the fall when the skies get darker earlier (and the mosquito population is somewhat reduced!).

A note on the time: We recommend that you schedule the talk to start at sunset, though you can schedule it for later if you wish. In early summer, this is often 9 pm. Although we know this is inconvenient for younger campers, it is necessary because it takes at least half an hour after sunset for the sky to get dark enough to set up the telescope. Please contact Prof. Wilcots if you have questions or wish to schedule a Universe in the Park visit. We look forward to hearing from you!

2022 Universe in the Park Schedule

The statewide Universe in the Park program of UW-Madison Astronomy Department is funded, in its entirety, by the generous support of Jere and Anne Fluno.