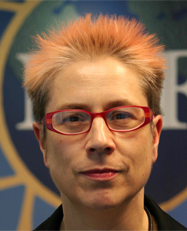 Galaxies in the Universe: An Introduction (Sparke & Gallagher)

This upper-level undergraduate textbook was first published in October 2000 by Cambridge University Press. The Second Edition was published in February 2007. It won the American Astronomical Society’s 2008 Chambliss Astronomical Writing Award.
Click here for the Table of Contents and Errata for both editions, and diagrams for the second edition in a form suitable for powerpoint presentations.

Structure and dynamics of galaxies, including observation and modeling of warped disks and polar rings; dynamical models for bars; studies of circumstellar and circumbinary disks in eccentric stellar binaries.

Dr. Sparke retired from UW-Madison on 7 May 2010, and is currently working in the Astrophysics division at NASA Headquarters in Washington, D.C.

A native of London, England, Linda Sparke watched the Apollo moonflights as a teenager, and later the close-up pictures from flyby missions of the giant planets and their satellites. Amazed by the accuracy with which humans on Earth could calculate the flight paths of spacecraft, steering them safely to an orbit millions of miles away, she decided to study physics and astronomy. After undergraduate training in applied mathematics at Cambridge University, she went into astronomy as a graduate student at the University of California at Berkeley.

Dr. Sparke held positions at the Institute for Advanced Study in Princeton, the Institute of Astronomy in Cambridge, and the Kapteyn Astronomical Institute in Groningen (Netherlands). She then moved to the University of Wisconsin-Madison, where she worked for two decades as a professor of Astronomy.

With Prof. Jay Gallagher, also of UW-Madison, she wrote the advanced undergraduate textbook “Galaxies in the Universe: An Introduction”, which won the American Astronomical Society’s 2008 Chambliss Award for Astronomical Writing. She is a Fellow of the American Physical Society. Before moving to NASA, she spent two years as a Program Officer in Astronomical Sciences at the National Science Foundation.