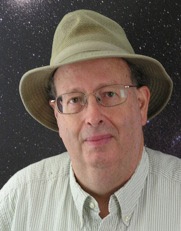 What are the structures of present day galaxies, how are they evolving, and in what ways do they connect to their cosmic environments?  My research addresses these and related questions from an observational perspective with an emphasis on less massive galaxies. Active binary stars such as novae also remain an area of interest.

Prof. Jay Gallagher began his astronomical career with multi-wavelength studies of classical novae before turning to focus on his interest in understanding the physical nature of galaxies.  His approach to extragalactic astronomy is based around multi-wavelength observations, often involving novel use of instruments to gain new insights into the properties of galaxies. Dwarf galaxies and related lower mass galaxies have been of particular interest, since they not only are the most common class of galaxy, but also show a huge range in their present day characteristics.  This diversity enhances their value for finding and describing the astrophysical process responsible for shaping galaxies.  Much of the resulting research further benefitted from fresh physical perspectives developed by his students.

Once one has dealt with novae, however, it is impossible to completely leave these fascinating types of stars alone.  These objects not only offer insights into binary stellar evolution, but also are superb laboratories for exploring a variety of time-dependent astrophysical phenomena.

Collaborations have played a central role throughout Professor Gallagher’s career, and this approach continues into the present. Thus he currently is working with groups in Europe on issues relating to starburst galaxies, while also maintaining US-based projects in a variety of areas, mostly relating to stellar populations and their associated feedback processes.

Observational astronomers require observations. Thus during his career Prof. Gallagher invested effort into improving our observatories. His contributions in this area include a stint as Vice President at AURA, Inc. to foster the successful design and funding of the Gemini Telescopes; serving as a member of the Hubble Space Telescope WFPC2 instrument team; involvement in the US national observatories in a variety of ways, most recently as Chair of the Board of Directors of the U.S. Virtual Observatory; helping to get the IceCube neutrino observatory project started as its first Acting Director, and working to insure the success of the Wisconsin’s partnerships in SALT and WIYN.